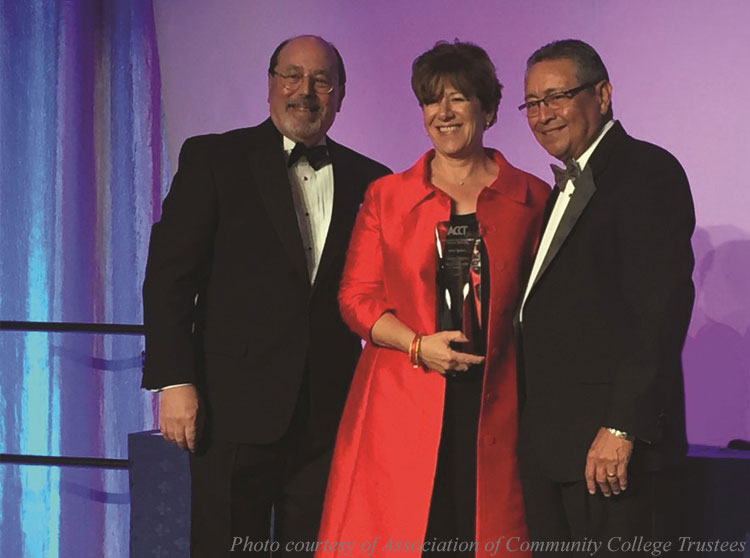 FVCC President Jane Karas is the recipient of the 2016 Marie Y. Martin Chief Executive Award from the Association of Community College Trustees (ACCT). She received the award at a ceremony in New Orleans on October 7, 2016.

Flathead Valley Community College President Jane Karas is the recipient of the 2016 Marie Y. Martin Chief Executive Award from the Association of Community College Trustees (ACCT). Karas was chosen for the award from a pool of five finalists from community colleges around the nation. She received the award at ACCT’s 47th Annual Leadership Congress in New Orleans on October 7.

The award is named in honor of Marie Y. Martin, who served as director of the Community College Unit, U.S. Office of Education and as a chief executive in the Los Angeles Community District. Karas was selected for the award based upon her initiation of innovative programs at FVCC, her work to maximize opportunities for FVCC students to be successful and her advocacy and service on behalf of two-year colleges in Montana and across the nation.

“Dr. Karas has guided our institution through its most dramatic period of growth and academic innovation,” said FVCC Board of Trustees Chair Shannon Lund. “She has worked to meet local workforce needs, including those in advanced manufacturing and healthcare, and has explored a wide range of specialized programs while ensuring that FVCC’s core academic programs are continually enhanced.”

ACCT is a non-profit educational organization of governing boards, representing more than 6,500 elected and appointed trustees who govern more than 1,200 community, technical and junior colleges in the United States and beyond. The mission of the association is to foster the principles and practices of exemplary governance while promoting high quality and affordable higher education, cutting-edge workforce and development training, student success and the opportunity for all individuals to achieve economic self-sufficiency and security.

How Can We Help You?